What happened on Mother’s Day weekend 2020 was the scariest moment of my life. On Saturday, May 9th, we discovered that our baby has a severe food allergy to eggs. At 9 months old, it was her first time trying eggs, and she had an anaphylactic reaction to eating just a few small scrambled pieces of egg – both egg whites and yolk. Within 15 minutes, her symptoms started with a rash on her face and neck, extreme itchiness, and unusual fussiness and crying – I think from stomach pains. Within an hour, she started to get hives with congestion and vomited. After 2 hours, she started vomiting again and had trouble breathing.

How the Allergic Reaction to Eggs Started

15 minutes after Mina ate eggs and we noticed her initial symptoms (face rash, itchiness, fussiness, crying) we knew something was wrong. We continued to watch her and decided to call the pediatrician 30 minutes after she tried eggs. It was the weekend, so we were waiting for the on-call doctor to call us back. During that time, I was texting my girlfriends, contemplating if I should go straight to the ER, but they suggested I go get Benadryl and wait to hear from the doctor. Then Mina threw up on our way to the store. The doctor called us as we got Benadryl and advised us to give Mina 2.5ml based on her weight. The doctor advised us to keep watching her and if she vomits again, then to take her to the ER. We continued watching her for another hour – she was uncomfortable, but she wasn’t fussing. She started getting tired from the Benadryl so we put her down for a nap.

We Had to Call 911 Because She Had an Anaphylactic Reaction

15 minutes after falling asleep, she started crying in pain and began vomiting again. This time, something seemed really wrong. She was in a lot of pain, throwing up, and having a hard time breathing. Then she was trying really hard to get the vomit out, but for some reason, she wasn’t able to properly vomit. It seemed as if she was holding her breath while there was pressure from her body to expel the food. I held her up high, while she was facing down, trying to get her to vomit, but I couldn’t do anything. She strained to vomit & breathe simultaneously, while her body became stiff, face limp, and her lips turned blue. We immediately called 911, and as we were waiting for the ambulance to arrive (3 min), the blue went away, but her eyes started to swell. Firefighters gave her a shot of Benadryl (9mg) and we went to the ER. There they gave her steroid and anti-nausea shots. She was monitored for 2 hours and then discharged. We were prescribed oral steroids for 5 days (2ml once a day) & 1ml of benadryl 3x a day for the first day, then 1ml after that as needed. We also asked for an EpiPen prescription – the doctor actually didn’t initially prescribe it for us, so make sure to ask!

Monitoring After Her Anaphylaxis to Eggs

We continued to watch Mina very closely for the next 7 days as it’s possible to have a biphasic reaction (a second wave of reactions hours or even days later). We stopped giving her the steroid after 3 days as she was back to normal and we noticed she was getting hyperactive on day 3, which is a side effect.

Below is a Snapshot of How the Egg Allergy Progressed and Her Treatment:

Baby Food Allergy Tips From What We Learned

When starting solids for the first time, it’s always good to be prepared. It’s more likely that your child will not have any food allergies, which is what we assumed, but you never know until it happens. In hindsight, I wish I had Benadryl readily at home and I wish I knew to give it to Mina right away. It was my first time dealing with an allergy, and I wanted to get my pediatricians thoughts first.

Here are a few tips on how to prepare for any potential baby food allergies.

Auvi-Q is relatively new, but is specifically designed for infants and toddlers who are less than 33lbs. The needle is also smaller, making it better suited for small bodies. We have both – EpiPen was initially prescribed by the ER doctor, and Auvi-Q by both our pediatrician and allergist. Both come with 2 pens. Now that the American Academy of Pediatrics recommends introducing potential allergens earlier on, there seems to be an influx of babies that have allergic reactions, thus leading to a need for an epinephrine pen better suited for babies (Auvi-Q). Auvi-Q is super easy to use – when you open the product, a recording tells you exactly what to do, which is really great when you can potentially forget what to do in an emergency situation. We watched a YouTube video on how to use the EpiPen, but I have to rewatch that video periodically so I don’t forget. It’s super simple, but I like to rewatch just to be safe.

Below is a list of the common food allergens to be aware of. Most of the time, it’s the proteins in the food that cause the allergic reaction.

Hopefully this post was helpful as you navigate starting solids with your baby. You can read about Mina’s diagnosis after meeting with the allergist here and her oral challenges here. 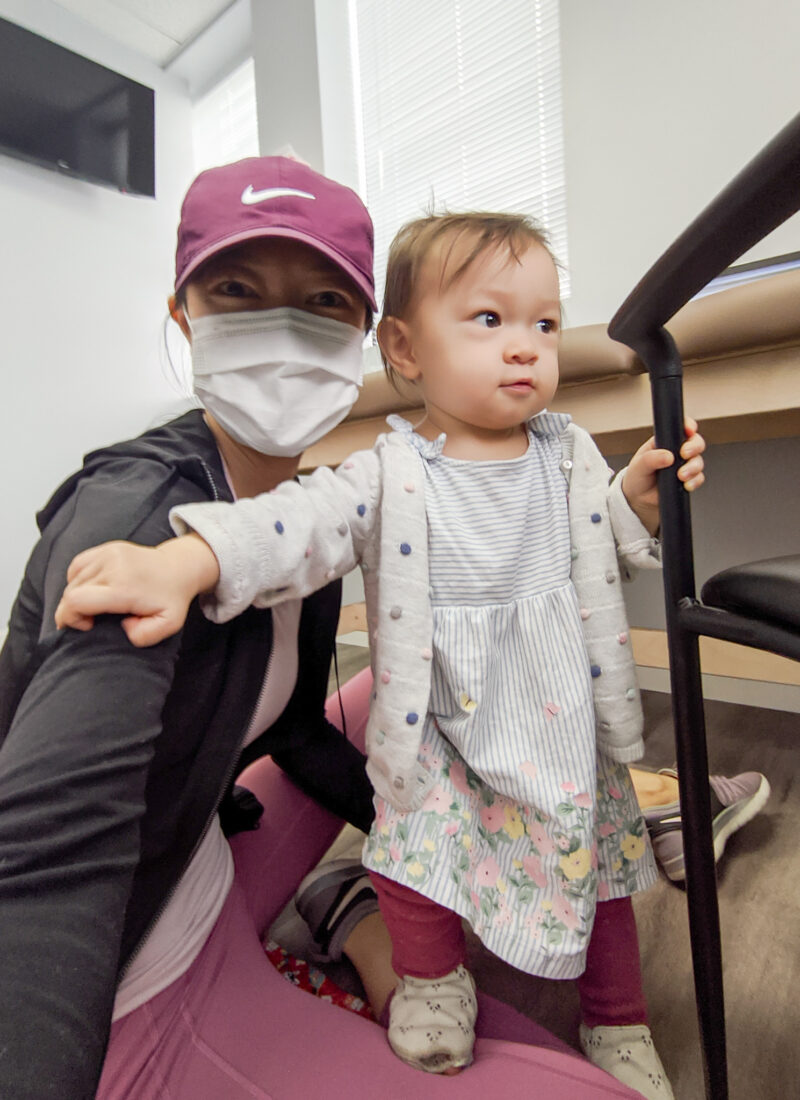 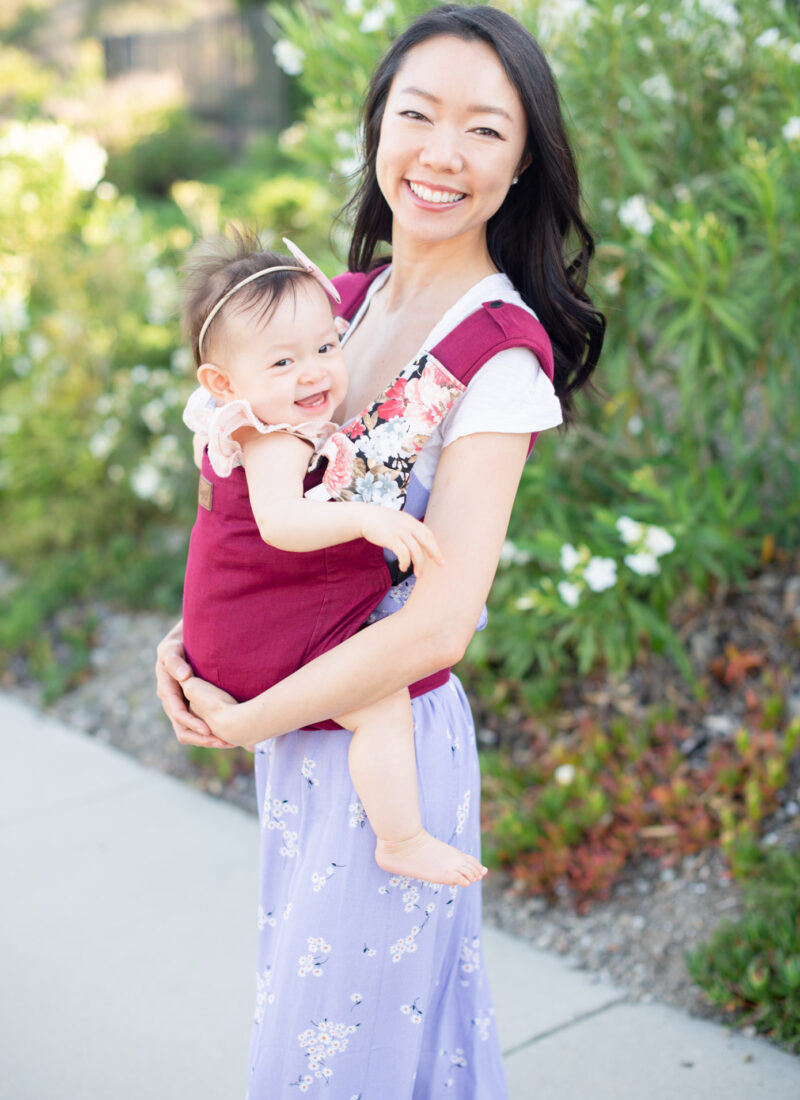 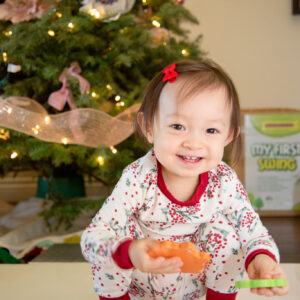 When she’s feeling her outfit vs when she hates

Happy Easter 🐣🐰🌷! It was so fun to watch

An early Easter basket for me filled with the cute